Waking up Spring mornings with the return call of a tom turkey is among the greatest thrills an outdoorsman gets to experience. 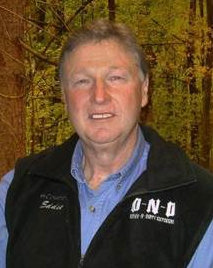 And who knows how many pre-sunrise mornings were welcomed by that unforgettable sound for Eddie Salter. He’s called The Turkey Man, and the Evergreen, Ala., native is among the sport’s most recognizable when it comes to tackling turkeys.

He’s done pretty well mimicking them in turkey-calling contests too. Salter has won more than 60 times during his decorated calling career and is a two-time World Champion. He knows his turkeys. Salter will be hosting a “Talkin Turkey” marathon this Saturday from 9 a.m. – 1 p.m. ET on The Sportsman Channel.

We caught up with Eddie recently to talk a little gobble, deer hunting and to find out what he’s been working on recently. He was more than willing to share some of that with you, the AHT readers.

1) Where did the passion for hunting come from?
My passion came from my daddy and seeing and hearing turkeys in the pasture behind my house. I started hunting with small game squirrels and rabbits – then came turkeys around 9-years old.

2) Why did you start turkey calling competitions? And do you still compete at all?
I felt like all the practice for the competitions and just the being around other callers and picking up on different ways to call and tricks of the game would help me in the woods. I do not compete anymore and stopped around 10 years ago.

3) What has been one of the best things/products you’ve seen come to the market lately for turkey hunting?

One of best products lately has got to be the squealing hen call or The Haint Gobble Call from Down N Dirty Outdoors.

4) You’ve completed multiple Grand Slams – what’s your favorite bird to hunt? Why?
I’d have to say it’s the Eastern turkey, simply because it’s the hardest turkey to kill due to all the hunting pressure it gets.

5) What are some of the projects you’re working on right now? New shows?
Well, I’m working with a new job that I enjoy – designing and working on new products for Down N Dirty Outdoors. I’m also starting a new television show that will air soon on The Sportsman Channel called “The Turkey Man Series” which starts airing April 1 at 1:30 p.m. ET.

6) What’s your favorite hunt over the years, either hunting yourself or calling for someone else?

This is an easy one for me. Without question, it’s taking my daughter when she killed her first turkey. She was around 14 at the time. Another one that is special is when she called me in a Rio in Texas last year. She is now 28.

7) Let’s set up the situation. You aren’t allowed to call the turkey, who would you want working the calls when you HAVE to talk a bird in?
If I couldn’t work the call and had to have somebody else calling … For me, it would have to be my brother, Dewan Salter.

8) We know you’re a successful deer hunter too. Ok, if the whitetail rut (and the deer season) happened during Spring turkey season, how would you be spending your days?
Another easy one. I would pick turkey hunting 10 to 1 over deer hunting any day!

Cat Tales: We got a chance to check out The Haint Gobble call in action when we met up with Eddie. What a neat call! Definitely worth learning more about.

He Got the Cover (Twice)!

In honor of this week’s release of the annual Sports Illustrated Swimsuit edition, which includes Kate Upton as its cover model, I thought I’d share something I stumbled upon by pure coincidence a few weeks ago. 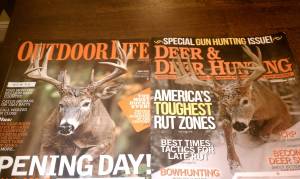 As I sat in my recliner, the magazine rack next to me had a pair of hunting magazines resting next to each other. The magazines were the October Outdoor Life and December Deer & Deer Hunting. As I glanced at them, likely pondering if I should pick one up, I noticed how much alike the massive buck pictured on their respective front covers was.

Then I looked closer.

I realized that it was actually the same deer, in almost the exact pose, possibly over the same log, at a completely different time (the D&DH photo includes a snow-covered ground beneath the buck).

I thought that was interesting.

And as I suspected, each cover was shot by renowned deer photographer (and fellow Southern Tier of New York native) Charlie Alsheimer.

That buck has done well for Charlie! I’m really surprised that both photos ran so closely to each other (within a matter of a few weeks). I wonder if either publication had any issue with that.

Editor’s Note: It’s been too long. And I’ve missed writing. The new year brought with it a lot of change in your favorite blogger’s life – almost entirely good change. Hello to a great new job, goodbye to a great old job. It all added up to a short break on the blog. We’re back now, and excited about a number of fun things going on for the blog in 2012. Here’s hoping it’s the greatest year of all, filled with many memories afield.

There are very few things that bond people like the camaraderie of the field. Time shared in the outdoors has a certain knack for binding people together as a brotherhood, a flock of kindred spirits in a world filled with forces that tend to crowbar people apart at every corner. The amazing thing about my favorite sport isn’t just how it connects one hunter to another, rather how it fastens communities together.

I was recently reminded of that in a way that I was simply not expecting: at a heartbreaking funeral.

Over and over again, the memories shared of one of those being remembered during the service, included time at the hunt club, or time together on this or that hunt. And with each memory, I found myself thinking that those stories sounded very much like the ones I imagine my family and some of my closest friends sharing. I could certainly relate to those moments.

Often times it’s hunting that binds together the people of the small, rural towns like the ground I grew up stomping in Allegany County, New York. It’s not just the actual hunters who share in the connection to hunting. Wives and mothers cooking, kids sharing stories about their dads at school and families sharing stories all year long about the hunts of seasons passed.

Those small towns exist all over this great nation, with hunting representing that local culture’s glue.

A friend who visited my neck of the woods made an astute observation that he shared with me year’s ago. He said that meeting people in most places of the world usually means some conversation about the weather.

Not in Western New York. There, you’re always asking about deer.

“Did you get your buck yet?” or “Been seeing any good ones?”

You rarely even have to mention you’re talking about deer. For the town where I grew up, that is already known. Everybody knows.