Last month we told you about Luke Pearson, the North Carolina resident who had a video headed into the finals of a contest sponsored by Mathews Inc.

Pearson’s video, “A Mathews Tradition,” was recently named the winner of the “My Mathews Moment” video contest! 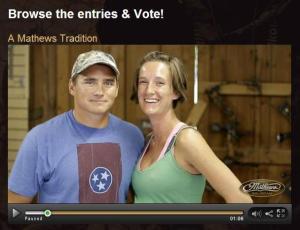 Pearson gets to enjoy a very nice turkey hunting trip as his prize. Here’s hoping the readers of AHuntersTales.com helped put Luke over the top! Congratulations to the entire Pearson family.

“A Mathews Tradition” shoots dead on

It’s not too often that you look back at a fruitless hunting season and be thankful. And I’m sure Luke Pearson wasn’t all-too excited when his North Carolina turkey tags never saw the light of day last spring.

Fast forward a few months and Pearson might win a hunting trip thanks to his family’s struggles with toppling a turkey.

Pearson’s video, “A Mathews Tradition,” is among a group of qualifiers in Mathews Inc.’s “My Mathews Moment” video contest. Finalists from the first round of qualifying will be selected based on a vote rating system that continues until early next week (Aug. 9). Pearson’s video is the best on the site, but it needs more votes! (CLICK HERE TO VOTE)

“The original plan was to get a bow hunt on film,” Pearson shared with AHuntersTales. “By the time we found out about the contest, deer season was over. We knew we would have to shoot for turkey season or try to get a hog hunt together. It turns out, shooting a turkey with a bow on film isn’t always the easiest thing to do and the only land we had permission to chase hogs on was a good distance away. Since the deadline for the contest was fast approaching, I decided to go a different route.”