I shot the biggest buck I’ve ever taken off of our family farm this year. He’s not among the largest I’ve ever taken and barely would rest inside the top-10 by looking only at his antler size. But he’s special and will go down as one of the most memorable.

But that’s not what this recap post is about. 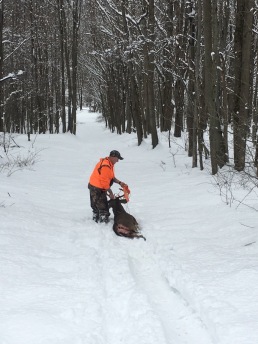 One of the most picturesque deer drags I recall!

It’s about spending the opening week of New York’s gun season with my family and seeing the sunrise on the season from a tree on our home farm for the first time in many years.

It’s about the cadre relationship that hunting camp provides.

It’s about cold mornings where the fireplace at camp feels a whole lot better than Mother Nature’s bitter touch on your cheeks.

And it’s about the reverence for a camp diary.

Each fall, many deer publications publish stories about deer camp. I love reading them all. Stories of the brotherhood that exists when families and extended families come together in the big woods of the north country, or in Michigan’s upper peninsula, … or anywhere else … have always caught my attention.

One of the spectacular views Mother Nature provided

This year was no different. I read an easily relatable story about deer camp, written in first-person by Dan Ladd (“The Joy of Deer Camp”) in New York State Conservationist magazine and got me excited before I even stepped foot into camp.

We weren’t necessarily at full capacity in our deer camp this year, but we had a bigger group than we’ve had in a long time. My brother Doug, uncle Paul, cousin Nicholas and nephew Matthew, represented three generations of family. My young son, Reid, also joined the group for a day of sharing the family woods!

My brother Doug and me sharing in the success!

Once a rookie of the camp himself, uncle Paul now represents the old guard. He married into our family over four decades ago. A “city guy” who married a farm girl in my late aunt, Paul had broad enough shoulders to join her brothers in camp, taking all of the ridicule that comes with being new to the sport of hunting. I’m happy to report he acclimated quite well and became a fixture at camp, to the pleasure of my late father and our family.

Uncle Paul shared stories this year about his first years in camp. Needless to say, he experienced a great deal of ridicule and good-natured hazing that would typically be reserved for a rookie joining a sports team. I’m a few years older than his son, Nicholas, who has been a mainstay at camp since he was a young teenager. 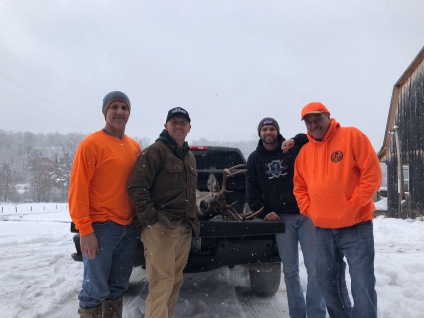 My nephew, Matthew, came into camp riding a three-year streak of punching his tag (and was able to fill it again this year)!

There were drinks. There were stories. There were fun memories of our family members no longer with us. The pool table, even with its minor off-kilter intricacies, became proving grounds one evening. The poker chips had the dust blown off of them for an evening of cards. 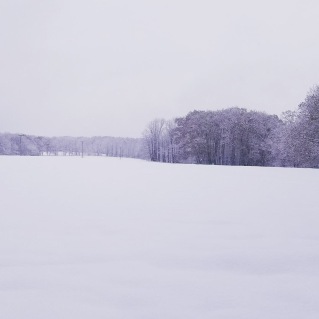 Another beautiful view afforded by the snow.

Memories of successful hunts that culminated with shoulder mounts in the cabin were bandied about. Our camp diary, an invaluable asset that has 40 years of history documented, was utilized as a reference point a number of times. Uncle Paul has served as the primary scribe of the diary over its entire existence. Others add only when he’s not available to do so.

It’s often discussed, but there is just something cleansing for the soul when it comes to the time at deer camp. Having experienced some semblance of camp across a number of states, there are many common threads that connect the spirit of deer camps everywhere. Those who have experienced it know it and no documentation of deer camp can do it perfect justice.

My son, Reid, joining in the fun on a cold, cold morning!

Perhaps that’s why I remain a sucker to the stories – to pull those parts that carry a similar look and feel to my own experiences.

I look forward to introducing my own kids to it.

There also were successes. The best part of those during deer camp is the ability for everyone to bask in that feats. In this case, everyone played an important role in the process – especially with over a foot of snow on the ground!

Cousin Nick and I share a photo before taking to the woods.

Of course, the week culminates with figuring out who won camp’s big buck contest! This year, my buck was fortunate enough to take the honor.

Once the bags are packed and camp is cleaned, departure day comes with its sadness. More than 50 weeks of great anticipation and mental reps have ended with “goodbyes.” The countdown, though, to next season’s deer camp begins.

It simply hadn’t happened before, the path made by the old, wise doe. 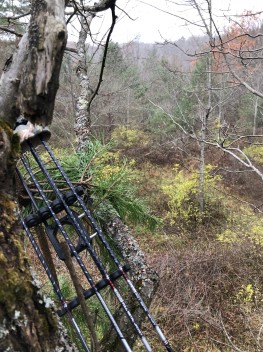 The view from old faithful. Updated travel routes kept the shooters out of archery range.

And with it, came little appreciation for the likelihood that the long-proven patterns of deer in this area of my farm had indeed changed.

It wasn’t until after I saw more deer, including a fine 8-point buck, make the same route from a common bedding area and into the hardwoods, that I realized deer aren’t behaving the same as they had for many years.

Even after briefly scouting the new, well-established trails on this new route well away from my faithful stand, it was hard to consider a change needed to be made. You see, many bucks have passed by this stand over the years, and no fewer than three bucks have been arrowed within 40 yards of this tree. Surely, this was the ideal location to be sitting.

Except it wasn’t. And it played a small role in not filling my 2018 archery tag. So too did my stubbornness to not change the stand location earlier.

Familiarity can be a detriment to an archery hunter. The reams of data that exist within a hunter’s memory from decades of hunting a familiar location can skew his or her decisions. That was reinforced enough in me this year that I’m eager to consider how I’ll change several of my stand locations for 2019.

This young buck followed one of the familiar trails.

Upon further pondering the challenges of familiarity, it dawned on me how valuable scouting can be to a new hunting location. These are often the most valuable – and fun – elements of hunting the unfamiliar. Those minutes and hours dedicated to learning about the local deer of a location can often be the primary indicator of success.

And advanced scouting before hunting familiar ground should  be no different.

It sounds simple, and it probably is. But when you’re coming from hundreds of miles away to ground you know as well as your backyard, you try to skip the scouting update portion of the hunt and take advantage of the knowledge you already have.

Things change within the terrain (felled trees, food sources, erosion, etc.) that provide enough of a reason to, at minimum, confirm your intuitions.

I should have done that. I’ve learned my lesson. And leave it to those old, wise does to teach me.

Things Change While Anticipation of the Hunt Remains

Things are different now. Some parts are better, some are … well, different.

I was able to catch up with my buddy Nick Pinizzotto today, and we spent a good deal of time talking about the evolution of our hunting passion.

In a little more than a week, I’ll be enjoying the familiar view from the woods with bow in hand!

Days of worrying about how big the buck might be on the receiving end of an Easton arrow have been replaced more by the full nature of the experiences.

That’s not to say that we don’t dream of big bucks, or that the experiences of yesteryear weren’t important. It’s just that the priority is … well, different!

Nick, who also serves as the Executive Director of the National Deer Alliance, recently moved back to his home stomping grounds in Pennsylvania. He became a father a couple of year’s back. Both of those life changes have an innate ability to change perspective on the true values of hunting. We spoke at length about the eagerness of hunting with our kids – how that trumps any time we spend in the

Having a little fun in the blind while waiting on deer can be an acceptable practice these days!

woods on our own.

I’ll be returning to my own home land in Western New York in just a week to spend several quality days looking for the biggest, oldest and baddest buck on the farm. The likelihood of seeing a buck soaring near the minimum Boone & Crockett standards are very low. I know that going in, but my excitement to get there couldn’t be much greater.

For starters, I don’t take the hunting part quite as serious. I still work hard and put in my time, but saying that is more of an indictment on how serious I used to take deer hunting. 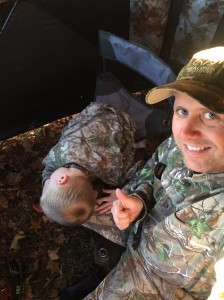 So too can taking a brief cat nap!

Additionally, my new career has me headed to the woods during the heart of the rut without the backdrop of serious end-of-season stress that my former job at NASCAR provided. I’ll be able to dedicate my energy to the daily chess match with the land, trying to execute a strategy that puts me within reach of taking a great deer.

This trip also means so much due to the fellowship with my dear friend, Kenny Roberts. We’ve made this trip together for over a decade and it serves as our opportunity to catch up on family, friends, parents and life. Over the years, there have certainly been more laughs than tears during those conversations. That said, there always is some time earmarked to get serious about life and chat through many of the important stuff in each of our lives.

Greg Johnston with NYS’s No. 1 muzzleloader buck in 2017!

It’s likely I’ll be able to see another friend and frequent AHT contributor Greg Johnston, who 21 years ago joined me as the renegade who would skip out of classes at our Basilian Catholic college to chase bunnies and deer all over Western New York. Just seeing Greg is always enough to get you excited.

Just as special for this trip, though, is the land. I love it on our family farm. I took it too much for granted as a young hunter. It’s hard, as a teenager, to understand that very few have the opportunity to leave school, grab their bow and get into a tree before dark. I thoroughly cherish my time spent in those woods now. Those woods shaped me more than I can easily explain.

Here’s to the challenging week ahead that will be anchored with anticipation. I can’t wait for the journey there, the cabin upon arrival, the time together with friends while I’m there. I can’t wait to get into a stand and steal a small part of that magical time during November when the rut is in full swing.

Come to think of it, maybe not everything is different now.