A Head Scratcher and Kentucky Elk

For the last several years, I have joined some 35,000 individuals who have entered an annual lottery for a Kentucky elk tag. In all, 90 hunters will receive a tag to bow hunt the burgeoning herd that roams the Bluegrass State. 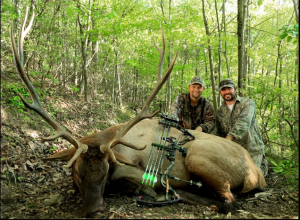 Waddell and Mundt, who are both among my favorite professional outdoorsmen, pose behind Waddell’s 2012 Kentucky elk. Photo borrowed from facebook.com/RealtreeOutdoors

Before I go further I want to go on the record, and be crystal clear, that this post is not in any way a bash on celebrity hunters. In fact, it’s far less about them – in this case two of the most popular in the country – and more about a program that decided to provide tags to celebrities sans the normal procedure for obtaining one.

I noticed a Facebook post this evening highlighting the successful exploits of Michael Waddell and Nick Mundt of each taking a bull elk this week in Kentucky. Congrats to those two Bone Collectors for closing the deal.

But I’m left scratching my head a little bit on what the “deal” actually was here. If I’m doing my scratch-pad math correctly, the chances of both hunters (neither a resident) drawing a Kentucky tag this year is less than .00013%. And that’s rounding up!

Providing “media” tags to out-of-state hunters for the purpose of highlighting and promoting a state’s hunting attributes is not a new practice. For years the state of Iowa has provided annual tags in order to get their state in focus on television. And they’re certainly not alone.

I point to both of those states, though, after feeling the same level of confusion with why they’re doing it at all.

In both cases – Kentucky for elk tags, and Iowa for whitetail deer – the demand for tags far outweighs the supply of tags. The famous economic supply/demand curve shows that in this case, the two are in different countries.

It takes no fewer than two years to be selected for a non-resident archery tag in Iowa, considering that most hunters try in the first year, are denied and provided a preference point, and then re-apply the following year. That’s the minimum time I’m aware of for the large contingent of hunters I know who apply each year. Three years is becoming more the norm for those hunters.

Winning the lottery, literally, in Kentucky is seemingly a once-in-a-lifetime experience.

So why do either of these states, or the large groups of others, supply these tags to hunters in order to be featured on their television program? My spidey senses say at the core it has something to do with dollars and little sense, but I’m sure some politician getting ready to seek re-election can provide a better explanation than me.

Perhaps it’s to shine light on the successful conservation efforts by a lot of groups to re-introduce elk to Kentucky (side note: pretty amazing is the success of this program, by the way. It’s a testament that pretty much pokes anti-hunters, ones who doubt hunting as a fantastic conservation tool, right square in the eye).

For now, though, I’m left to ponder the logic alongside more than 34,000 other hunters who don’t stand a chance of getting drawn for a Kentucky elk tag next year!

With the exception of those who may have spent all of 2012 living under a boulder, you’re probably well familiar with the slew of “Call Me Maybe” cover videos that are circulating the digital world.

Some of the most famous include the U.S. Olympic Swim Team, the Harvard baseball team, Sesame Street and even Jimmy Fallon (who at least was joined by the original artist, Carly Rae Jepson, of Canada, for his rendition).

Well, there’s finally one to make hunters proud. And leave it to those wild and crazy folks in Healy Lake, Alaska to bring it to us.

It’s worth checking out, with the fair warning that you’ll likely not get the song out of your head the entire day. That is an issue if you’re a middle-aged gent who runs the risk of getting odd looks from co-workers and wives alike. If you’re a single woman, you should be fine.

Sadly, while videos of its kind have generated more than 1 million views from around the globe, the recently uploaded Alaskan Hunter version is up to a shade over 8,000 on popular sharing site YouTube. Give it time.

Back in the saddle

Fear and the observation that my nimbleness has lost some of its vigor in recent years led me to drop a little extra change before this hunting season started. And unlike that slumped over walk of shame you sometimes present around your wife after a hunting purchase, this one came with nothing but support. 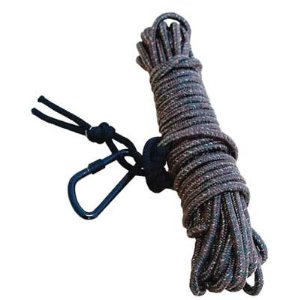 After doing research, I purchased the multi-pack of Hunter Safety System Lifeline in order to maximize my safety over the duration of my ascension into a treestand, and the subsequent climb down following. I’ve always worn a safety harness of some kind the last 20 years, but have zero reason why I haven’t completed my safety repertoire by having a climbing system in place.

Why now? Well it started with an innocent fall out of the back of my truck a couple weeks ago after my foot got hung up between the wheel well and 4-wheeler. A few days later, I slipped while adding corn to a feeder that led to a ‘(bleep) over tea kettle’ moment that knocked the wind out me. Simply put, I’m just not as nimble as I used to be. Call it age, lack of concentration or added weight to new places on my body (I don’t quite weigh the 150 lbs. I did as a young hunter), it’s just different.

I purchased the HSS Lifeline instead of opting to make my own for a couple reasons – none more significant than the fact that the cost was not significantly higher to purchase the sets already made.

I was able to put the Lifeline to the test already this season. The NC opener was Sept. 8 and my hunting buddy Jason and I were able to hit the woods for a few hours.

Jason Shell and me during a beautiful NC morning hunt. No shots fired.

Our hunting team is planning to do a lot more videoing this year after Jason’s resilience led to the purchase of a full set of HD equipment (all the top stuff). I’m looking forward to being part of both the hunting and videoing of several hunts throughout the season.

Where did all the posts go? Posts have been a little bit ‘off the radar’ for much of the year. Good news – the hunting season is upon us and I have a sleeve full of ideas to write about. The frequency of posts is likely to start climbing soon. There are a few AHT8 posts coming up too (8 questions from people you’ve heard of in the outdoors).

We’ll also be hearing more from our AHT Northern Field Editor Greg Johnston over the next several months. Please keep checking back for that.

Whether your season has started or not, here’s hoping the 2012-2013 season is the one where your outdoor dreams come true.