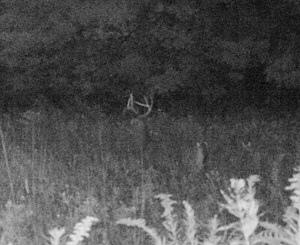 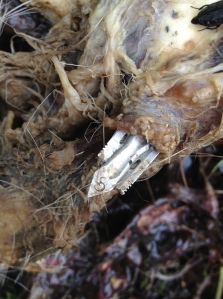 My feelings on rabbit hunting weren’t firmly in place until college.

While I managed to pop a few bunnies here and there as a teen on our farm, it wasn’t until I met two beagles named Flash and Barney while away at school that I found out just how enjoyable it can be to round-up rabbits.

Now I just wish I could do it more often.

My brother-in-law Jeff Albaugh, and his son, Brock, allowed me to join them (and their beagle Abbie) for a holiday hunt last weekend and it brought back a lot of the memories from those rabbit hunts way back when.

We opted to take along a couple handheld cameras in order to make a blog post out of the hunt. Have fun watching it, if for no other reason than you get to see me in a funny hat.

Here’s hoping you all have a great start to the New Year!

As my dad tells it, he was amid a normal service call in the fields of one of his best farming customers. This day was pretty ordinary except he had my cousin Richie, who was no bigger than a blade of timothy grass, along for the ride.

Then ordinary turned anything but.

With his focus squarely pointed toward the mechanical task at hand, a wack job with a loaded shotgun pointed it square at my dad’s head, threatening to pull the trigger at any moment. The tripped-out gunman, who turned out to be the son-in-law of the farmer, was certain that my dad was on the property stealing.

And if the farmer wasn’t home to disarm the gunman after several intense minutes, there stands a strong likelihood I wouldn’t be here.

My dad, a concealed weapons permit holder in one of the most difficult states to be so, was able to have a weapon with him for every service call from there on out.

I pride myself on being open minded. And I’ve heard a lot in the last eight days about folks wanting to talk about gun control.

Let’s do it. I’m more than happy to converse about it. Part of engaging in the talk about gun control comes with the responsibility to get educated about the facts.

None of my arguments are new – many of them are circulating media channels and social media networks in unprecedented fashion. Very few are as powerful to me than the fact that our Commander in Chief does not spend any waking moment without armed security protecting his life.

That luxury is more than justified.

But any argument to reduce my ability to protect myself, is to say that my life is less important than the President’s. That very well could be true. My mama might beg to differ, just as I can assure you that I will utilize whatever means possible to protect my children. To me, they are the most valualbe lives on this earth.

I do not own any of the oft-reffered to “assault-type” guns. My reason is simple. The legal versions of these guns do not provide any advantage for me from several of the semi-automatic weapons I own when it comes to protecting my family. If they were to provide additional value on that front, you could bet your bottom dollar I would have one.

The evoloution of evil is scary. Anyone who thinks greater government meddling in gun rights will keep nimrods, or persons outside of their normal capacities, from performing evil acts is simply ignorant. Any further restrictions are only mandating the means for law-abiding citizens to react to that evil.

Among many of the things that still aren’t adding up to me is the fact that every single terrorist who performed the evil acts at schools in acts that are gaining media attention of late, were breaking the law the moment they stepped foot in an educational building with a weapon. THEY WERE BREAKING THE LAW. How will stricter gun control stop them from doing those hateful acts?

I’m all for talking about gun control. All I ask is that those talking come armed with the facts. Far too much is riding on it.

My Formula For Not Keeping Score

The question is better than the answer I told him. My friend had stopped over to the house to take a look at the buck I had harvested earlier that day. That’s a nice buck Greg, he said. What does he score? I haven’t put a tape to him I said, and I’m not sure I ever will.

The buck, a big 9-pointer with a small G5 on his left side that could possible make him a ten, was one of the heaviest racked New York State bucks I had ever killed in my 20-year plus whitetail hunting career. 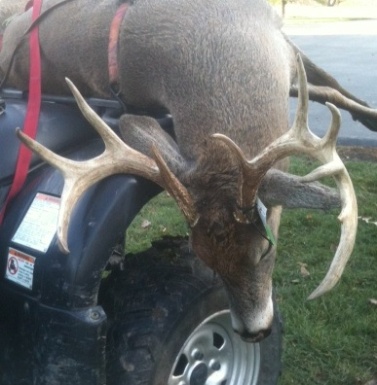 I had anchored the buck on the afternoon of Nov. 19 with a Winchester slug fired from my Remington 1100 Special. The encounter happened by chance, as I ascended to my stand for the afternoon hunt and spotted the buck standing in a nearby CRP field. A few shots from the stand and a finishing shot from the ground, and the buck was mine for good.

After admiring my kill, my buddy’s question really got me thinking. How do we as hunters really value our trophies? Is score the end-all, be-all in the whitetail woods? Gosh, I hope not. I’ve never been big on score; in fact I’ve never had any of my deer officially scored. That’s just not me. I hunt mature deer, period.

Why, you ask? My answer is pretty simple really, I feel putting a label/score on a deer diminishes the hunt I had for him. Personally, I like to let the memory of the hunt marinate in my thoughts a while. It’s kind of like placing a back-strap in a bag of spiedie sauce for the weekend. Follow me? You have to let it sink in. To me, slapping a number on a trophy buck too quickly devalues the animal.

Now having said that, I recognize the fact that The Pope and Young Club and the Boone and Crockett Club set whitetail records based on the score of a buck’s antlers size. My fear however is that in the new-aged world of whitetail hunting with so much emphasis being placed on harvesting trophy deer, the sport of hunting is getting lost in the mix. Don’t get me wrong, I agree with and practice Quality Deer Management. I enjoy hunting big bucks and like killing them even more, but does the score of a deer inflate or lessen the worth of the animal or hunter? I say no.

I embrace and cherish the sport of whitetail hunting. I live and breathe whitetails. Anyone who doubts this fact can ask my beautiful wife or taxidermist. I just don’t feel we as hunters should base a trophy on a series of numbers.

I’d like to give a shout out to my Dad who spent the majority of these past summer months conducting a Timber Stand Improvement Project on our property. Dad and I are committed to growing big deer, but with two young children and a full-time job, much of the grunt work gets left to him. He rarely disappoints. Thanks Dad!

I’d also would like to publicly congratulate my friend and good hunting buddy, John Koska who put the hammer down on this mature 8-pointer while hunting my property December 1st. 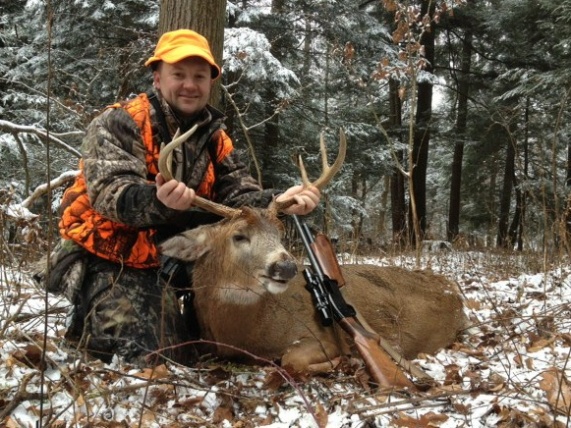 I cannot tell you how many bucks John has passed over the years on our farm looking for the right deer to take. This guy seemed like a fine candidate. Way to go John!