A bus ride to remember …

High school bus trips taken by boys athletic teams have a way of leading to long-time memories for those student athletes on them. Putting 15 or so 14- to 18-year-old boys together for more than three minutes has its way of leading to shenanigans. And our trips were no different at Wellsville High School a couple decades back.

But outside of the occasional wedgey-gone-wrong by Jeremy Hyer, we rarely had anything as cool as what happened to the boys basketball team at Rushford-Peterson (Minn.) on a bus trip returning from a tournament last month.

According to the AP, the team’s bus struck a beautiful 180-class typical 10-point on the 28-mile trek home. 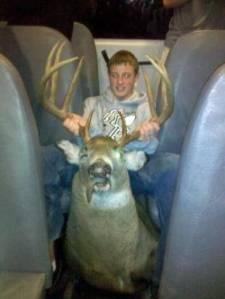 A member of the Rushford-Peterson boys basketball team poses with the 10-pointer whose fate was decided by the team's school bus (image borrowed from StarTribune.com)

The team, filled with several young hunters, sought and received permission to take possession of the recently-expired deer. To the Minnesota DNR’s credit, permission was granted under the caveat that it would become an educational tool for the school’s biology department.

To top it off, though, the team was able to make the remainder of the trip home with the 10-point buck riding (pardon the pun) shotgun – in the aisle of the bus! Imagine how many pictures were taken on cell phones during that trip. That trip tops a wedgey any day of the week.

A lot of traffic has come through this blog thanks to the lively discussion of the Wiktor sheds referenced in earlier posts. I’ve purposely decided not to comment to several of the posts. I’ve tried to only post the facts as they have been presented from reputable sources (i.e. – actual published articles, etc.). The debate is great and there stands a strong chance we’ll never know the whole story behind the shed find. That said, I hope those that have come to the site to read about that topic have found other parts interesting too.

Just a reminder that you can sign up to receive an e-mail when the blog has been updated. Because I do not get a chance to update it on a daily basis, this is a good way to find out when to stop by to read new posts. It is the only communication you’ll get from me (A Hunter’s Tales does NOT spam!). It’s also very easy. Just click the button in the left column and provide the e-mail address you’d like to receive the updates at.

I’m happy to report that negotiations with a fantastic storyteller are nearly complete to have our first contributing writer with an outdoors article at A Hunter’s Tales! Look for a post by the special guest to come in the next couple weeks. Depending on how the weather is in Hawaii, it should have pictures included!

This entry was posted on Wednesday, February 17th, 2010 at 6:45 pm and tagged with Rushford-Peterson bus deer accident boone and crockett buck and posted in 2010, General Tales. You can follow any responses to this entry through the RSS 2.0 feed.
« Dealing with PHD
Get a FREE AHT Sticker!!! »