I was having a conversation with a co-worker recently about why we hunt and it was interesting that both of us had one of the same top reasons, which is for truly organic food. 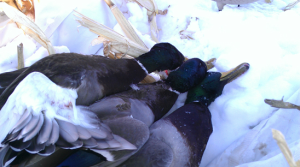 Within hours of being shot, these fine mallards were processed and in my freezer.

Don’t get me wrong. I’m not saying that the only reason I hunt is to put meat on the table. In fact, I’m toying with the idea of getting more into predator hunting because there is an overabundance of predators and they have a profound impact on game that we eat as humans. What I am saying is if I didn’t eat the wild game that I shoot, I likely wouldn’t hunt. That may surprise many of you, but rest assured that I am the furthest thing from killer, which I define as someone who hunts for the sake of the thrill of the kill.

Vacuum packing ensures the meat will stay fresh for several months, although I doubt these mallard breasts will be waiting long.

Just prior to moving to North Dakota, I had come pretty close to eliminating any meat from my diet that wasn’t wild game. I admit that I occasionally had a weakness for a pile of hot wings and a stadium hotdog, but for the most part I only ate what I shot. When we relocated to North Dakota last spring, I had to give my remaining meat away leaving me with nothing in the freezer for our first few months here. While this didn’t impact Angela as she is a devout vegetarian, it had a definite effect on me because for the first time in a long time I was eating store-bought meat products. While often tasty and juicy, I never felt quite the same after eating commercial meats and there was something about the richness of the various cuts of beef, pork, and chicken that just didn’t seem right.

I was elated when hunting season finally came around this year and I was able to begin refilling the freezer. After a pretty successful fall, the freezer is now full of a variety of duck species, geese, and the whitetail buck that I shot in early November.

My whitetail buck was quartered and partially processed in the field before final cutting and wrapping. This is a necessary practice if you hunt far from road access in the wilds of North Dakota.

I really appreciate knowing exactly where these animals came from, and there is something special about having a hand in processing all of them. The same cannot be said for commercially packaged meats, particularly those that are purchased at large chains and big box stores. Please don’t get me wrong. This is not a rant about not eating meat from commercial sources. In fact, I encourage everyone to purchase meat products as close to the farm as possible, and directly from local farmers where possible. Farms that allow their stock to grow naturally and practice grazing as a primary way to feed are preferred to those that overfeed and under-exercise their animals. There are a number of good documentaries on factory farms and processed foods that I encourage you to check out in order to help inform your opinion.

There is plenty of wild game in my freezer for the coming year.

There is a lot of quality information out there about the differences between wild game and domestic meats, and I found a very balanced report prepared by the University of Wyoming Cooperative Extension that is worth reading. You might be surprised to learn that there isn’t a huge difference between protein and fat content of wild and domestic meats, but this varies widely among species as described in the chart below. The real difference is in the lifestyles of the animals while they are still alive, and how they are handled from death through the butchering and packaging process. It’s a big enough difference for me to choose wild game over commercially processed meats at least 90% of the time.

I’ll conclude this article by sharing the interesting story of author Tovar Cerulli with you. Mr. Cerulli turned vegetarian and eventually vegan in his early 20s, only to later decide to take up hunting as a way to feed himself and his family better. Cerulli states on his website: Over the past three years, my blog has brought omnivores, vegetarians, hunters, and non-hunters into dialogue with one another. It is a place for celebrating all the ways we are sustained by the larger-than-human natural world. A place for asking questions. A place for not being too sure any of us has all the answers. A place for listening, learning, and laughing, especially at ourselves, peculiar animals that we are.

I became acquainted with Cerulli through Twitter, and have been intrigued by his perspective ever since.

I’m blessed with the ability to obtain my own meat through hunting and a wife that works hard to fill our refrigerator and shelves with organic foods. Granted, I could get crushed under a giant piece of falling space junk tomorrow and it wouldn’t matter, but I think it’s worth my time to eat as healthy as possible in anticipation of many years ahead.

While there are many reasons that I hunt, being able to put healthy meats on the table combined with the humane nature of harvesting it through hunting make me proud of the lifestyle I’ve chosen.

—-
Nick Pinizzotto blogs at www.WhitetailWriter.com. He is the Chief Operating Officer of Delta Waterfowl. The Western Pennsylvania native currently resides in North Dakota, where his passion for the outdoors is put to good use on a daily basis.

This entry was posted on Friday, January 18th, 2013 at 9:35 am and tagged with Field to Fork, Hunting for Food, Nick Pinizzotto, Tovar Cerulli, Whitetail Writer, Wildgame and posted in 2013, General Tales. You can follow any responses to this entry through the RSS 2.0 feed.
« New Yorkers Stripped of Rights, Freedom
Chasing Game Through a New Lens »