Jazzed For the Turkey Chase

There may have been similar posts on here in recent years, but I just don’t recall a spring that I have been more excited to hit the woods chasing turkeys.

The reasons why seem logical: 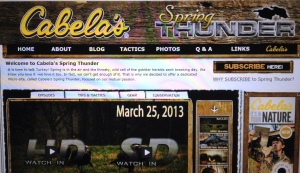 – Deer season ended too long ago – and the 2012 season saw me hit the woods fewer days than any other season over the last 20 years.

– I’ve had a chance to see more turkeys already this spring than I recall over recent years – especially in my home state of NC.

– My hunting buddies keep posting pictures online of the turkeys they’re already killing in states that have already kicked off turkey season.

– My local hunting buddies’ interest in turkey hunting is rising at the same rate as the NC population of thunder chickens.

– My preseason scouting trip reminded me of my love for opening a morning to the sounds of a gobble.

One other reason is worth mentioning. If you read this blog, you know I’m a big fan of Midwest Whitetail productions. And the same group of producers for that semi-live online hunting show have created a similarly themed turkey show, Cabela’s Spring Thunder.

Host Aaron Warbritton does a great job in the role and it’s easy to see that he and his turkey hunting cohorts know what they’re doing when it comes to chasing turkeys.

Here’s hoping we’re connecting on a few chases here over the next month. We’ll certainly keep you posted on when that happens!