Note to Self: Next Time Remember the Arrows

It wasn’t one of my finer hunting moments. My father and I had made our half-hour morning commute to our hunting property in Livingston County, NY. All was well and good as I prepared myself for the morning hunt. Dad stopped the truck as the plan was for him to drop me off near my stand location – I would walk from there. I reached into the back of the truck for my hunting paraphernalia. Safety vest check, H.S. earth scent spray check, Bowtech check, Catquiver…Ah… 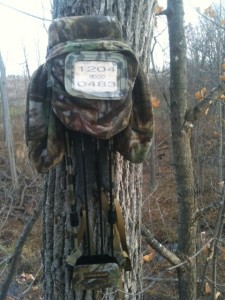 Yup, that’s right I had left my Catquiver at home. Without it I was dead in the water. I’d be like Dale Earnhardt Jr. showing up to the race track without a Sharpie in hand.

My backpack carries my arrows, grunt call, bleat can, gloves, knit hat and more. There was one solution to this problem and that was to drive back home and retrieve my catquiver, which I did. To complicate the problem, I arrived back home where I received a call from my Dad who said he forgot his release in the truck after I dropped him off. I eventually returned back to the woods, handed Dad his release and climbed the tree. All by 7:30 a.m.

It’s fair to say the morning didn’t go as planned, but with all of the garb we archery hunters carry now a days, I’m actually surprised it hasn’t happened before [but hopefully won’t again].

As I forecasted last week, rut action has really picked up. A quick search of the internet will show that hunters from the Midwest to the Northeast have been knocking down some bruisers. Unfortunately I haven’t been one of those lucky hunters. I’ve seen plenty of chasing and have passed up on plenty of smaller bucks, but I have yet to get a good look at a big boy. I aint giving up though.

Shooting a mature buck in the Northeast has proven to be a challenge. Not impossible, but a challenge. I know that. Hey, I’ve eaten my archery tag the past three years in this quest. At this point in my hunting career I’ve made the conscious decision though to shoot big deer or no deer – or at least just does.

As I said, Saturday marks the beginning of shotgun/rifle season here in WNY. I will reluctantly join the orange pumpkins. I enjoy gun hunting I just don’t enjoy listening to all of the weekend warriors whack every deer that runs out of the woods on the first deer drive of the season. 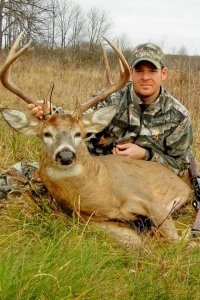 That’s not to say that opening day isn’t one of the best days to be in a stand though. I got lucky last year when ‘The Great Eight’ came strolling in in search of a hot doe. He seemed to have no idea it was firearm season, but then again we only allow stand hunting on all of our properties.

I hope to have some luck this week. I’ve put in my time, I just hope it pays off.

Here’s to a safe and enjoyable hunt, Greg Johnston

This entry was posted on Thursday, November 17th, 2011 at 3:16 pm and tagged with Archery, Dale Earnhardt Jr. Shotgun, Greg Johnston and posted in Day Afield, General Tales, Gun Hunting, Uncategorized. You can follow any responses to this entry through the RSS 2.0 feed.
« Rut Action to Peak This Week
Eleventh Hour Hunt Ends Quest for ‘The Ghost Buck’ »

2 responses to “Note to Self: Next Time Remember the Arrows”