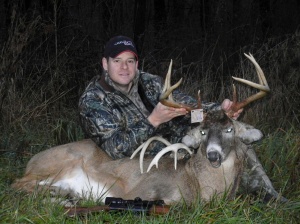 It’ll go down as one of the more memorable hunts in my hunting career, and certainly one of my most coveted accomplishments. ‘The Shed Buck,’ roams no more. He now rests in peace on my wall!

This, like many other hunting stories, started with a single trail camera photo. At the end of the 2010 hunting season, I placed my cameras back out into the field to take inventory of what deer had survived the New York hunting season(s). I was pleasantly surprised when a 2.5-year-old 9-pointer made a cameo in front of my Moultrie.

I knew who this deer was and, in fact, had watched him all through the summer months in a bachelor group with several other bucks. The odd part was that I’d never encountered him through the entire 2010 season and, to be honest, had forgotten about him by season’s end. Never the less, he was alive and that was a good thing. 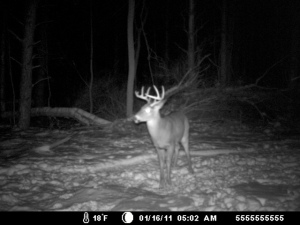 I closely monitored the one camera the buck seemed to frequent most. The plan was to try and capture as many photos of the deer as possible [I captured dozens] and, if at all possible, recover both of his sheds. It worked perfectly as on Feb. 6th the deer arrived sporting only the left side of his rack. That meant the right side wouldn’t be far from the camera location. Even better, I captured another photo shortly after which showed the buck had dropped his left side, too. I was very confident I would recover both of his sheds and begin building a history with this deer. 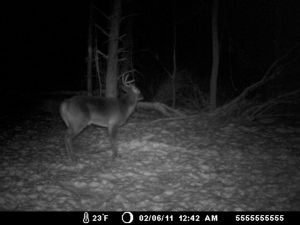 The buck appears with his left antler only.

I made several attempts at recovering the antlers, but the deep snow made it a difficult task – especially with my then 3-year-old son firmly placed on my shoulders. My luck changed as the snow began to melt in late March. I was able to recover both sheds approximately 20-yards apart. I was thrilled.

Fast forward to the summer of 2011 as I glassed my normal honey holes in search of this one specific deer I’d dubbed, ‘The Shed Buck.’ Try as I did, though, I never located the deer through the entire summer. I began to wonder if the deer had been hit by a car or if he had just moved out of the area as many younger bucks do. On Oct. 23rd I was given a glimmer of hope when I grunted in a handsome 8-pointer to within 30 yards. The deer locked up and presented me with a bad shot angle. I elected not to take the shot, but I began to wonder if I had just laid eyes on ‘The Shed Buck?’

I had a similar experience with the deer in early November as he chased a doe in from behind me but, as I reached for my bow, he caught movement and walked off in the opposite direction. I was sick. I noticed that night, though, that the buck had a fairly significant injury to his right leg. He walked – or hobbled – very slowly.

I hung several new stands in the following days hoping to get a crack at this big 8-pointer with archery tackle. Things changed on Nov. 18th when I harvested another one of my Hit List deer. This meant I’d have to wait until shotgun season to try and kill the big 8. In New York, hunters are allotted one antlered deer for archery season and then another antlered deer for the firearms season.

The first opportunity I had to hunt the area was on the afternoon of Nov. 23rd. It was unseasonably warm and a touch windy, but I headed out to one of the new stand locations I had recently hung. I climbed the stand only to discover I had forgotten my safety strap in a tree from the previous days hunt. I made the decision to climb down and hunt from the ground. I quickly formulated a ‘Plan B’ and began to maneuver myself about 100 yards to the south where I would have a good view of a natural travel corridor. It was the best I could do, given the circumstances.

As I walked down a mowed path on my way to the travel corridor, I glanced to my right and saw my number one Hit List buck appear out of nowhere. There he stood at 100 yards looking at me through the thick goldenrod. I raised my Remington 1100 .20 ga., centered the cross hairs and let a Winchester fly. The deer whirled at the sound of the shot and began to move in a northerly direction.

I took off running hoping to get a glimpse and another shot off at the buck, but when I got to where he should have been, I couldn’t find him. I figured one of two things had happened – either I killed him and he was lying dead, or he never exited the goldenrod field because of that bum leg. I slowly climbed onto a nearby dirt mound to get a better view where I saw the buck standing a mere 20 yards from me. Another shot from the 1100 anchored the buck for good. As it turned out, I never hit the deer on the first shot. His injured leg just prevented him from running too far. 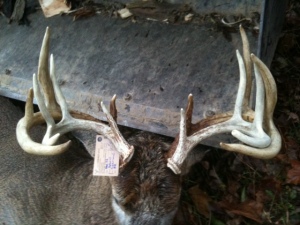 Only one question remained unanswered now and that was, was this indeed ‘The Shed Buck?’ I went back home to retrieve my 4-year-old hunting buddy, the sheds and the tractor. A quick comparison of the sheds to the deer left no doubt, that I had indeed, just killed ‘The Shed Buck.’ I couldn’t believe it came together the way it did.

Looking back, I think this was just one of those hunts that was meant to be. Earlier in the day I had contemplated hunting another property, but decided against it. You take that, coupled with the fact that I forgot my safety belt, and the deer’s injured leg slowed him down enough, which allowed me to get a second shot off. 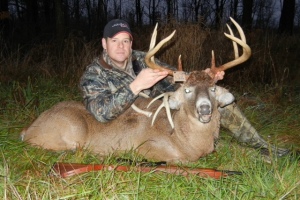 There is no more gratifying feeling for a whitetail hunter than to establish a history with a particular buck and then successfully kill him. It was one heck of a week in the deer woods for me, killing two of my Hit List bucks in six days – one with a bow and one with a gun.