It Turns Out, She’s One of Us!

Very few things have captured the national news cycle over the last 24 hours more than a particular football fan sitting in the stands during last night’s BCS National Championship game. 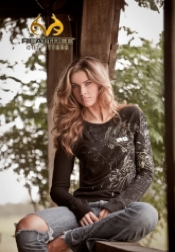 Katherine Webb as a Realtree model (Image borrowed from Realtree.com)

This particular show stopper, though, just happens to be dating A.J. McCarron, the quarterback for Alabama who easily steered his team to consecutive national championships during the aforementioned game. That’s still not what made her Twitter followers grow roughly 8,200% since (and still climbing!).

Katherine Webb (@_KatherineWebb) was in focus on ESPN’s broadcast when play-by-play analyst Brent Musburger made several comments pointing out her beauty. The rest of the world, as awkward as it was, pretty much agreed.

I’m not sure anyone could argue that she’s beautiful, but then again, she is also the reigning Miss Alabama.

For us hunters, it gets better.

It turns out Webb also is a hunter. In fact, she is a camouflage model who has done work for Realtree in the past. According to Realtree staff, she loves to hunt quail, dove and deer, she describes herself as a country girl and is very proud of those facts.

I’m from the country. I’m a hunter. Heck, I even have a boat load of photos featuring me in Realtree camo. Any comparison to Miss Webb stops right there for me.

This entry was posted on Tuesday, January 8th, 2013 at 8:26 pm and tagged with @KatherineWebb, Alabama, Brent Musburger, Katherine Webb, Model, Realtree, Twitter and posted in 2013, General Tales, Uncategorized. You can follow any responses to this entry through the RSS 2.0 feed.
« Exercise the Ol’ Fashion Way – Chasing Rabbits
Dear Deer: Fear this Spyder »