The planning and hunt for this buck I would later nickname, MrMr began in 2016 when my trail cameras captured a dozen or so images of him throughout the hunting season. Though, I never laid eyes on him, I was confident he was a 3.5 year-old buck and hoped he could squeak through the (entirely too long) NYS firearms season to reach the ripe age of 4.5.

How a Conservative Approach Netted This Hunter His No. 1 Target Buck

My strategy was to continue to run cameras throughout our property during the winter months in hopes of capturing an image or two of the buck to confirm he was alive. My New Year’s wish came true when on January 2nd, MrMr was captured entering our food plot planted to Frigid Forage Big N Beasty.

This Image Confirmed the Buck’s Survival

This buck was now my No. 1 target for the upcoming season and I would spend the next 10-plus months orchestrating and strategizing a game-plan that I hoped would result in the two of us crossing paths.

I continued to build a history with MrMr as spring rolled around and my son and I hit the woods for our annual shed hunt. As fate would have it, the first set of antlers we located were the match set of MrMr. It was another piece to this whitetail puzzle.

As spring faded and the dog days of summer arrived, my father and I once again planted our strategically located food plot where MrMr was captured in that January 2nd picture. As dust rolled from underneath the rototiller, I envisioned what it would be like to see MrMr step out into bow range.

It’s goal like this that motivate whitetail junkies like me. We think, plan and pray for opportunities at a mature buck and in this part of the country, harvesting mature buck is the ultimate hunting challenge. This isn’t the Midwest, rather Western New York where a decreasing few, but still some subscribe to the ole brown-and-down way of thinking.

I began running trail cameras again in September hoping to once again capture and maybe even establish an early season pattern on MrMr. Hope as I did, MrMr was a no-show. No images, but many questions began to fill my mind. Had he died during the winter months, been poached or even hit by a car – like my No. 1 target buck two years prior?

As we flipped the calendar to October and the NYS archery season opened, I still had no images or evidence that MrMr was still around. I decided to take a conservative approach to my season and be patient. I’ve learned a lot over my 26-years of chasing whitetails, but none more important than knowing when to hunt a certain deer. The risk is often not worth the reward – and to minimize that I would let my cameras do the work. Based on that intel, I would react accordingly. 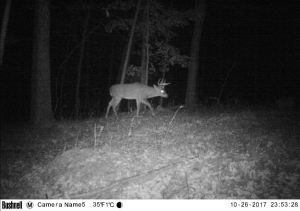 And He Makes an Appearance

And my strategy paid off on Oct. 26th MrMr was captured bumping a doe past one of my cameras. It was time to act, but not quite yet. With temperatures in the mid 70’s to near 80, I would wait for the right weather – and by that I mean a cold front. Getting an arrow in MrMr would require help from Mother Nature in the form of a barometric pressure drop and some assistance from the Deer Gods.

That cold front would arrive in the days to come as MrMr continued to be active – and this time in daylight. I planned to try and intercept the buck at a pinch-point on our farm where the deer are forced to walk up and around a massive gully on their way to food. As I sat in the stand and daylight began to fade, I was shocked to look up and see a solid big-bodied buck heading my way. It took a matter of second for me to grab my bow and come to full draw. A release of the arrow and like that, my 10-plus month plan had come to fruition. The buck bounded out of the woods, hit our open field and went down 60 yards from my stand. It’s a memory that will be forever etched in my hunting archives. I called my father to tell him the news.

Upon taking some nice field photos with the buck, I wanted to verify his age so I took him to the NYS Department of Environmental Conservation where a DEC biologist examined him. And as I has suspected and hopes, MrMr was confirmed to be a 4.5 year old. The biologist thought it was really cool that I had his match-set of sheds too.

The hunt for this buck is one I’ll cherish for a long time. It’s so rewarding to build history with an animal, game plan, peruse and then harvest that animal. Nothing is more gratifying to me.

This entry was posted on Friday, November 17th, 2017 at 10:37 am and posted in Uncategorized. You can follow any responses to this entry through the RSS 2.0 feed.
« Meaningful Journey – Quest for First Elk Complete
The 26 Year Quest »