I’ve been extremely fortunate to harvest some great New York State bucks through the years that any hunter would be proud of – and I am, but I’ve always been chasing the elusive ‘giant.’ And by that I mean a buck I would be consider a trophy whether taken in the Midwest or the Northeast – a monarch so to speak.  My 26-year quest came to an end Saturday Nov. 18, 2017.

My whitetail hunting career dates back to 1991 when I was 14-year-old. My first kill came that year. I was so proud of that button-buck.  I’m now 40 years young and have been chasing whitetails ever since.

The opening day of the 2017 NYS firearms season would dawn at sunrise that Saturday morning. I had made my way in the dark to a part of our Livingston County farm that I’d never hunted. Why? Well, the wind that morning was blowing out of the southeast and for our property that just doesn’t work well. All of our sets work best with a north or west wind and I had strategized the night before on where I would have to set up to give myself any chance of seeing deer.

Once making the trek down the hill I picked out a tri-maple tree and shimmied my Muddy climber up it. At sunrise I was set up. In tote with me was my CVA .50 muzzleloader. After a successful archery season, I had made the decision to hunt with the smoke-pole because any deer I’ve been able to take with it just means more to me. It’s a personal thing. I’m an archer at heart, but the second best weapon in my opinion is a muzzleloader. One shot, one chance and when successful I feel like I’ve accomplished a heck of a lot more.

As the darkness faded and light began to hit the forest floor I could see a stark-white rack moving through the woods. I grabbed my gun, shouldered it and readied for a shot. As the buck moved his way through, I couldn’t make up my mind if it was a deer I wanted to take a crack at. By the time I decided I would shoot, the buck was gone. As he worked his way off and out of my life I was left to ponder if I had just made a mistake. I would soon be assured I had not.

I sat for a few more minutes and had a small spike work past my stand. I was taking onus in the fact that my game plan was working. Execution? Maybe not, but the plan, yes.

The buck tends an estrous bedded doe – seen here in the background.

As I sat there enjoying the morning I looked up to see a sight I’ve waited more than two decades for. I didn’t move as the buck was looking down the hill and appeared to be looking at me in the tree. I slowly grabbed my gun and came to my feet. I raised and steadied only to see that the buck had walked several more feet and was now behind a large blow-down. I waited knowing  he was still headed my direction and I knew once he stepped out from behind the downed tree, that  would be my opportunity.

As the buck cleared the blow-down, I clicked my safety off and gave a small grunt to stop him. He stopped, but in doing so turned slightly and faced nearly right at me. This was my chance. I centered the cross hairs on the buck’s chest and squeezed the trigger. Boom! Smoke rolled out of the muzzleloader and the buck whirled and ran. I was extremely confident I’d made a good shot, but I didn’t see him go down – although it looked like he was about to when I lost site of him. With a finger to the sky I made the call to my Dad.

The Biggest Buck of My Life

“I think I just shot the biggest buck of my life!” I told him. After recapping and replaying the shot over to Dad, I became even more confident it was good. The buck never flagged (put his tail in the air) when he ran which is always a good indication of a lethal hit.

I gave it 10 minutes or so and made my way down the tree in hopes of finding a solid blood trail. And I did. I clicked my iPhone to video and recorded the moment I walked up on the buck for the first time. He had only gone 80 yards or so before expiring. The shot was perfect. As Bon Jovi would sing, ‘Shot Through The Heart!’ I called Dad again and told him the good news. I then proceeded to call and FaceTime my best hunting buddies. 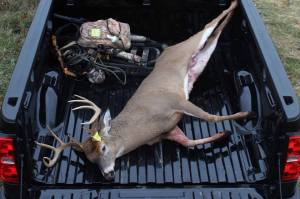 The Buck in a Bed

I don’t know that yet, but do have intentions of having an official NYS Big Buck Club scorer put a tape to him. As I mentioned earlier, I’ve been blessed to take some beautiful animals over the years (you can read about many of them on here @ AHT), but score has really never meant a whole lot to me – in fact, I’ve never had a single deer officially scored. This buck is a bit different for me though. He fulfilled that 26-year quest on Saturday Nov. 18, 2017.

In the wake of this hunt and week long celebration, I’ve been reminiscing about many of the hunts and deer that got me to this point. I’m going to include some of those photos to selfishly help me reflect back through the years. 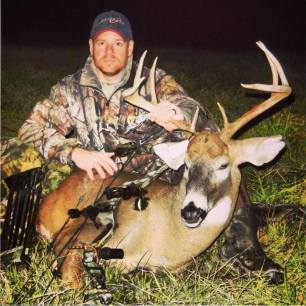 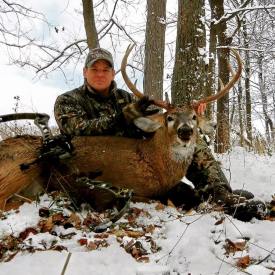 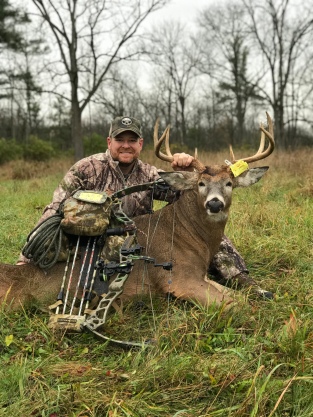 This entry was posted on Wednesday, November 22nd, 2017 at 12:55 pm and posted in Uncategorized. You can follow any responses to this entry through the RSS 2.0 feed.
« MrMr & The Master Plan
It’s Back! 2017 AHT Holiday Gift Guide »